Proud to celebrate Pride at Bazaarvoice 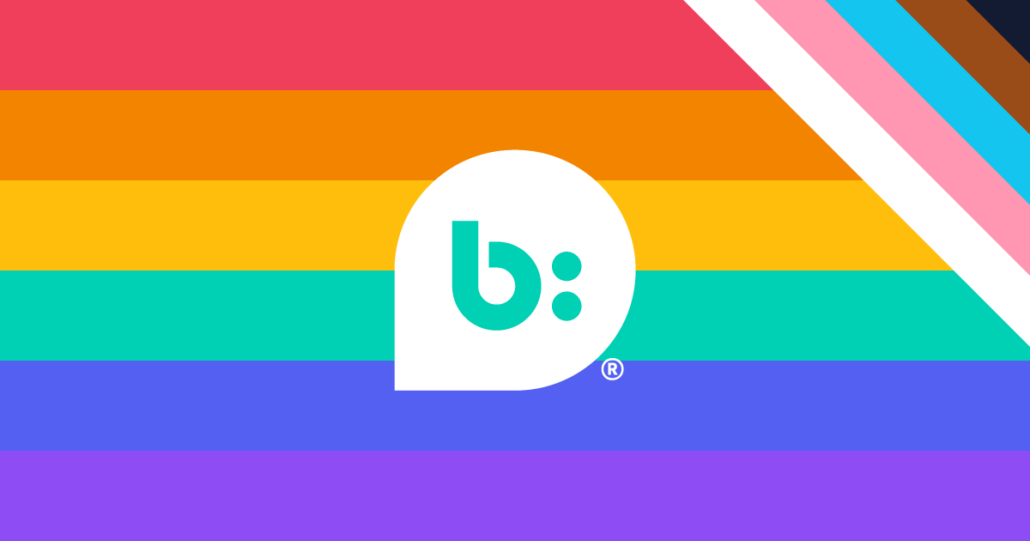 Let’s talk about Pride🏳️‍🌈. Pride means different things to different people — whether that’s celebrating with your chosen family, joining marches for equality, honoring those who paved the way, drinking too many Cosmos, or attending one of the many Pride events around the globe.

In recent years though, Pride has become synonymous with brands changing their logo to a rainbow logo on social media and doing little else. But it should be so much more than that.

We recently established a number of employee-led resource groups (ERGs) at Bazaarvoice because diversity, equity, & inclusion (DEI) isn’t just something we stick on our website, it’s woven through who we are as people, and as a business. Our ERGs are there so all employees, whether part of a community or an ally, can feel welcome, supported, and involved.

“DE&I initiatives at Bazaarvoice run throughout how we operate as a business and have improved everything from morale and camaraderie to business policies and employee retention.”

This year’s Pride Month was the first since B:You was established so we had to make sure it was extra meaningful, and extra exciting. We reached out to other ERGs, both community members and allies, for ideas, events, and resources (listed below). We thought up engaging events, as well as the following weekly communications model to celebrate and acknowledge the history and culture of those that represent Pride to our ERG members:

How did Bazaarvoice celebrate Pride?

We based each week on a different contribution the LGBTQ+ community has made to society, and provided resources to read, watch, and listen to. Not to mention special events like drag bingo and a talk on why pronouns matter!

The LGBTQ+ community has an inspiring, and sometimes heartbreaking, history. While many countries provide equal rights today, it wasn’t always the case. The Stonewall Riots in New York City, the Gay Liberation Front in the UK, civil rights marches around the globe — it’s taken years of fighting and dedication to get where we are today. So for week one we wanted to honor that!

I think it goes without saying that the LGBTQ+ communities contribution to the arts has been huge, to say the least. It always has been, and likely always will be. Music, film, TV, radio, literature, you name it. They’ve all been dominated by the LGBTQ+ community over the years.

We’ve all heard phrases like, “Omg he’s such an icon,” or, “She is just so iconic.” But what does this actually mean? A gay icon is someone who is recognized as a cultural icon by members of the LGBTQ+ community, though they don’t have to be a member of the community themselves. Think of Judy Garland, Princess Diana, and Lady Gaga as prime examples!

The icons of the LGBTQ+ movement have spanned a variety of backgrounds, geographies, and identities. Whether it’s a politician who paved the way for LGBTQ+ rights or one of the biggest pop stars in the world advocating for the community, an icon can represent many facets of the community.

Being an icon isn’t exclusive to the arts either, and includes athletes and even fictional characters (Xena: Warrior Princess, anyone?).

We still have a long way to go, and it’s important for our community and our allies to recognize the ways in which we have fought historically to gain equal protection, and what we can continue to do for members of the community.

The future isn’t fixed and progress isn’t guaranteed — the overturning of Roe vs Wade has highlighted that. It’s devastating news for women, and also possibly opens the door for a revert of LGBTQ+ rights. Week four was to highlight that the fight continues, and how we can continue to be good allies.

Last but certainly not least — LGBTQ+ culture! We wanted to end on a fun note, but also highlight that queer culture is more than asking, “scene or not scene?” Culture is different to different members of the communities — there’s subcultures within the overarching rainbow of the community and it’s always evolving!

So we wanted to highlight what makes LGBTQ+ culture so special, through the programs, stories, podcasts, and topical stories that make our culture so unique. The more we see members of our community shine, the more that our subculture will continue to be embraced and championed by community members and allies alike. Go us!

Pride isn’t just for Pride Month. It’s not something to just do once a month, and why should it be? Our own research tells us that community members are demanding more from brands during Pride — they want brands to be authentic about how they celebrate it. It’s more than a rainbow logo on Instagram, and it’s more than just one month a year.

The same research highlighted above also warns of the practice of rainbow washing — supporting the LGBTQ+ community publicly, but privately harming them. At Bazaarvoice we want to lead by example in turning the tide away from rainbow washing because authenticity is one of our core values. We want to let our actions speak for us, so we intend to listen to the community and continue Pride events all year long.

Here’s some of the initiatives we’re looking forward to working on throughout the year (and we’ll fly our Pride flags high while doing it!🏳️‍🌈):

B:You will continue to encourage acceptance, foster a safe work environment, raise awareness of issues affecting our community, and provide counseling and support for our members. While having fun along the way! And Bazaarvoice will continue our commitment to championing DE&I initiatives through our ERGs, and beyond.

Check out our dedicated DE&I webpage to learn about the rest of our ERGs!

Do you want to join a company that not only champions diversity, but believes success is dependent on it? Be your authentic self at Bazaarvoice. See job openings here.

Announcing the winners of Bazaarvoice’s Women in STEM Scholarship