Why Gen Alpha are the most authentic generation

Adam Tinworth provides rapid live-capture of Bazaarvoice webinars, in partnership with drawnalist Matt Buck who does the illustrations you see on the page. 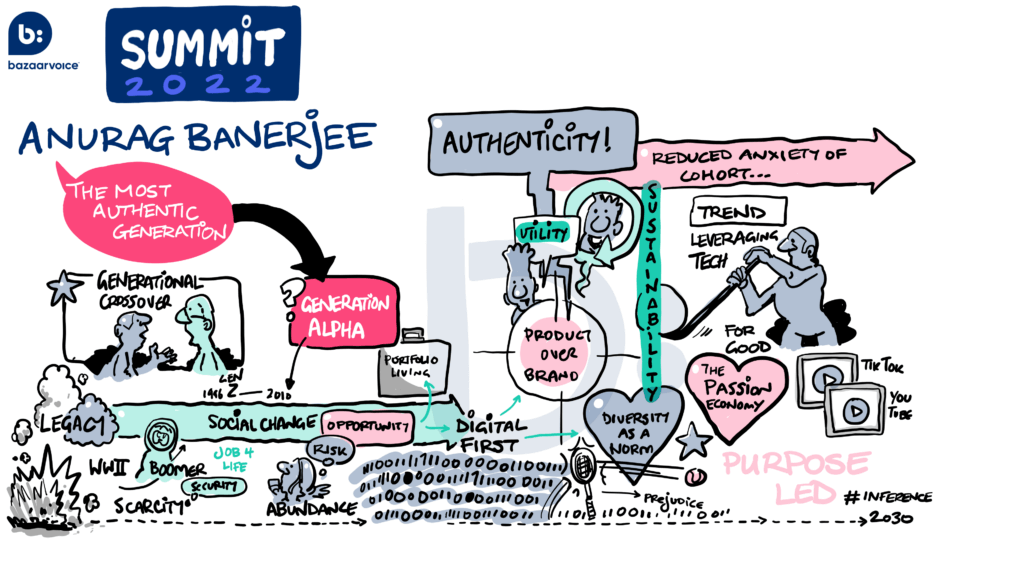 These are live-blogged notes and sketches from a Bazaarvoice Summit session delivered by Anurag Banerjee, CEO and Co-Founder of Quilt.AI, on April 6th 2022. If you prefer, you can catch the on-demand webinar version here.

There’s a new generation entering the market, and they’re very different from the generations that came before them. But, to understand them, we need to look at what’s happened in the last 100 years of consumerism.

That means starting with the Boomer generation, who grew up with the scarcity of the post-war period. They learnt the value of savings, hard work, and fitting in. Gen Alpha, conversely, is growing up in a world of absolute abundance. They can take wide and large-scale risks and still make a living, as they see that as a route far more so than long term effort in traditional employment. And they live in a world that encourages them to be themselves, rather than trying to fit in.

About 30% of the Gen Alphas in the workforce will be entrepreneurs, rather than working for a large firm.

The mindset of Gen Alpha

Gen Z has done a great job through the pandemic of talking about mental health — but they’re an anxious generation. Gen Alpha, are tremendously more confident, and they’re completely digitally native, and digitally first. They’re more mentally attuned to the idea of digital activation. Their parents are investing in their social well being and mental health. They’re preparing Gen Alpha for a healthy outlook in the way that Gen X and Gen Z didn’t get.

Surprisingly, Gen Alpha don’t care about brands. But they do care about products. They define their identity around products. So building a brand around products might be less relevant than having a strong product in your portfolio in the coming years.

They’re also very attuned to buzzwords. 100% of children were able to make conscious choices around vegan, sustainable, and organic foods in a study they did in American schools. That level of awareness has been rising quickly over the last 15 years, from next to nothing to near ubiquity.

The Gen Alphas are also very aware of diversity and inclusion issues. Emma Raducano, who won the US Open tennis championship, is a woman with British, Chinese, and Hungarian roots — and she likes old music. Diversity is their normal — they’re multicultural by default. Diversity will be completely authentic for them.

Parents are teaching Gen Alpha that diversity is just as important as maths and the alphabet. This is one reason they’re less anxious and more confident. While their Gen Z compatriots are undergoing digital detoxes — as many of us have done — Gen Alpha are exploiting tech leverage at a much more rapid pace. They focus on interweaving it as part of their lives.

A new relationship with technology

The “Tech for Good” business model set up by Gen Z is becoming a conversation in schools, and it’s emerging as the dominant view of technology. Gen Z also grew up in the shadow of the financial crash, so they’re more financially savvy than their predecessors, the millennials. But Gen Alpha are digital finance first, they’re investing online, and they’re using apps to manage both money and chores.

Gen Z is the heart of the self-discovery process that is the Great Resignation. Gen Alpha, meanwhile, is starting to use tech to build out the passion economy. It’s getting reflect din the idea of creator tools. TikTok has exemplified the idea that there’s other ways to make a living.

So, cast your mind forwards to 2030. Consumers are truly authentic, and looking for products and experiences to match. Are you ready for it?

The best way to win over this tech-savvy generation? On TikTok.

The retail industry is as strong as ever. And consumers hold the power like never before. They decide how a brand is perceived, and the risk of boycott in today’s cancel culture is very real. The dramatic power shift to customers has led to heightened actions and vocalizing for authenticity, improved experiences, and above all, for consumers to feel heard. Catch up on Bazaarvoice Summit to see how to win hearts and minds of today’s consumers.