Adam Tinworth provides rapid live-capture of Bazaarvoice webinars, in partnership with drawnalist Matt Buck who does the illustrations you see on the page. 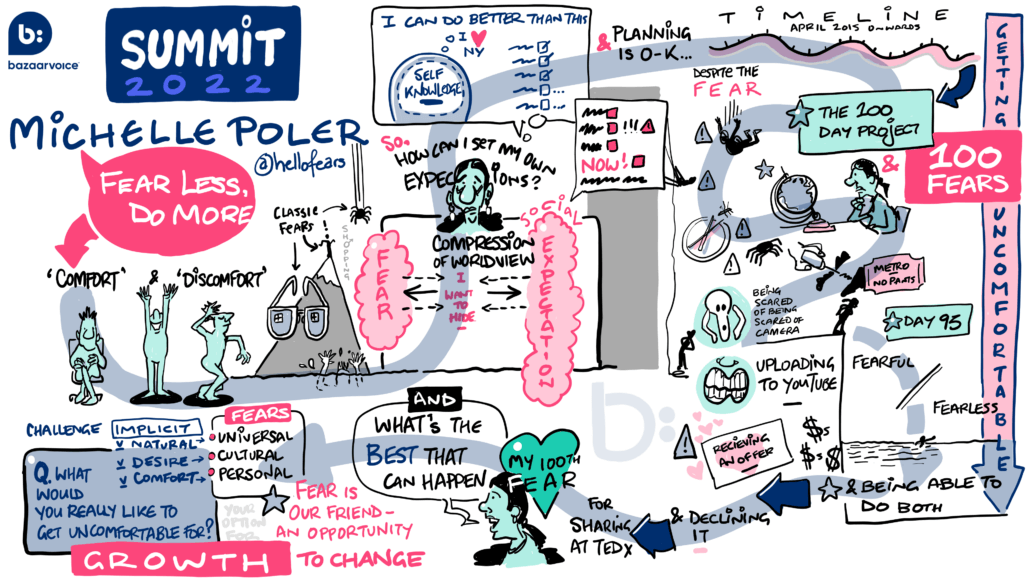 Fear less – do more, with Michelle Poler of Hello Fears Daring to lead with brand authenticity Building communities that people love Building a holistic influencer strategy for Redken that works Putting consumers first with Johnson & Johnson Why Gen Alpha are the most authentic generation

These are live-blogged notes and sketches from a Bazaarvoice Summit session, delivered by Michelle Poler, Author and Co-Founder of Hello Fears, on April 6th 2022. You can find the on-demand webinar version here.

It’s time to get uncomfortable. What’s your earliest memory of fear? What were you afraid of as a child? Can you recall the fears that kept you awake at night?

Michelle was terrified of being a flower girl at a wedding. She was afraid of walking by herself and not being able to find her Mum. There was a deeper reason for that. At seven years old, her parents realized her shyness might not be emotional, but a product of short-sightedness. Her comfort zone was the limited range she could see.

We all have our comfort zone, and they’re all different. But they can also change from day to day. They expand as we face our fears, and they contract as we limit ourselves.

Escaping the constraints of society and fear

Michelle felt constrained by society’s checklists, unlit it hit her that she didn’t know who she was checking the boxes for. Was she happy? She was computable, sure, but happy? Not really. So, she had a choice: Continue box-checking or find the courage to do other things.

Naturally, she uprooted her life, moved to New York, and started a masters in branding. Ask yourself this: Where do you want to be in 10 years from now?

It’s scary to plan ahead. You want to dream big, but not too big because you’re afraid of failing. But she did it, she planned big, and within months she was starting a movement, giving talks, and bringing her husband into her business. And she and her husband went nomadic.

Planning your life is a powerful process. You can’t just plan, though. You need to get uncomfortable, you need to start doing things. She embarked on a 100-day project: Do one thing you want to do 100 days in a row. And that would unleash the other steps in her plan.

There’s so many things you could do in that model. In her case, she wanted to become a braver person. She comes from a family of World War II survivors. They were the lucky ones — but the fears never went away, and passed down through the generations. She wanted to break the family fear chain — and document the process on YouTube.

Uploading the videos was an entire fear by itself. And that led to her face being all over the Internet, on news websites, and other media. Cool — but not the best part. For her, that was getting messages from people all over the world who were inspired by what she did. What was resonating so deeply with people?

On day 95, she froze with fear when doing a high jump into a pool, but she was inspired by a little girl who conquered the same fear to jump. And that taught her that there’s a difference between bravery and being fearless.

Be brave, not fearless or fearful

A brave leader is so much more authentic than a fearless or fearful one. Brave leaders lead by example when it’s hard, by feeling their fear — but overcoming it.

Her last day, her last fear, was day 100. She was approached by a brand, who wanted her to rappel down the Rockefeller centre, sponsored by them. But that wasn’t authentic, that wasn’t her fear. So, she turned the brand down and chose, instead, to face her fear of public speaking at a TEDx conference: TEDxHouston.

Inevitably, as she expressed her nerves, someone asked her what was the worst that could happen.

Fear is not your enemy, it’s your ally

She started the project aiming to eliminate fear, but on the way she realized that fear is our ally, if you keep it in its place and don’t let it hold you back. Now she sees fears as an opportunity to discover what your next big thing needs to be.

Let’s dive into each in turn.

You’re probably afraid of spiders, needles, or heights. We’re born with these. They’re natural, keep-yourself-alive fears. Be aware of them, but control them.

As we grow, we develop cultural fears, based on a desire to be accepted and fit in. These are the fears of not belonging, of being ostracized. But if we’re not careful, our need to fit in might hurt our authenticity, which is invaluable right now. We have to find who we are, not who we feel we should be.

These are closely related to our self-esteem. We hold back because we want to avoid failing, and to be held accountable for that failure. The enemy of success is not failure, it’s comfort. It stops us innovating and fighting for what we deserve. It makes us look at our phones rather than start conversation with people around us.

So, day 101. The project is over. Now what? Her husband suggested turning this experiment into a movement — and she found herself going through a rollercoaster of emotions, and she hates rollercoasters. The choice she wanted was the most scary one: Starting the movement and trying to make a living from it. Going back to a job like her old one was comfort.

She chose the scary one, the one that lead to change and growth. The important thing is to identify the growth option. What is your next growth move?

The more uncomfortable we get, the greater the reward.

What would you get uncomfortable for?

The retail industry is as strong as ever. And consumers hold the power like never before. They decide how a brand is perceived, and the risk of boycott in today’s cancel culture is very real. The dramatic power shift to customers has led to heightened actions and vocalizing for authenticity, improved experiences, and above all, for consumers to feel heard. Catch up on Bazaarvoice Summit to see how to win hearts and minds of today’s consumers.

Top 5 insights to monitor from your UGC program data

Want the latest content delivered straight to your inbox? Join our monthly newsletter.

What is your job role?

Thank you so much for subscribing to our content! We'll keep you informed of all the latest and greatest content that we publish.