The premium fashion brand GANT was able to reduce its return rate by 5%, and therefore significantly increase revenue, by including product reviews on its website. 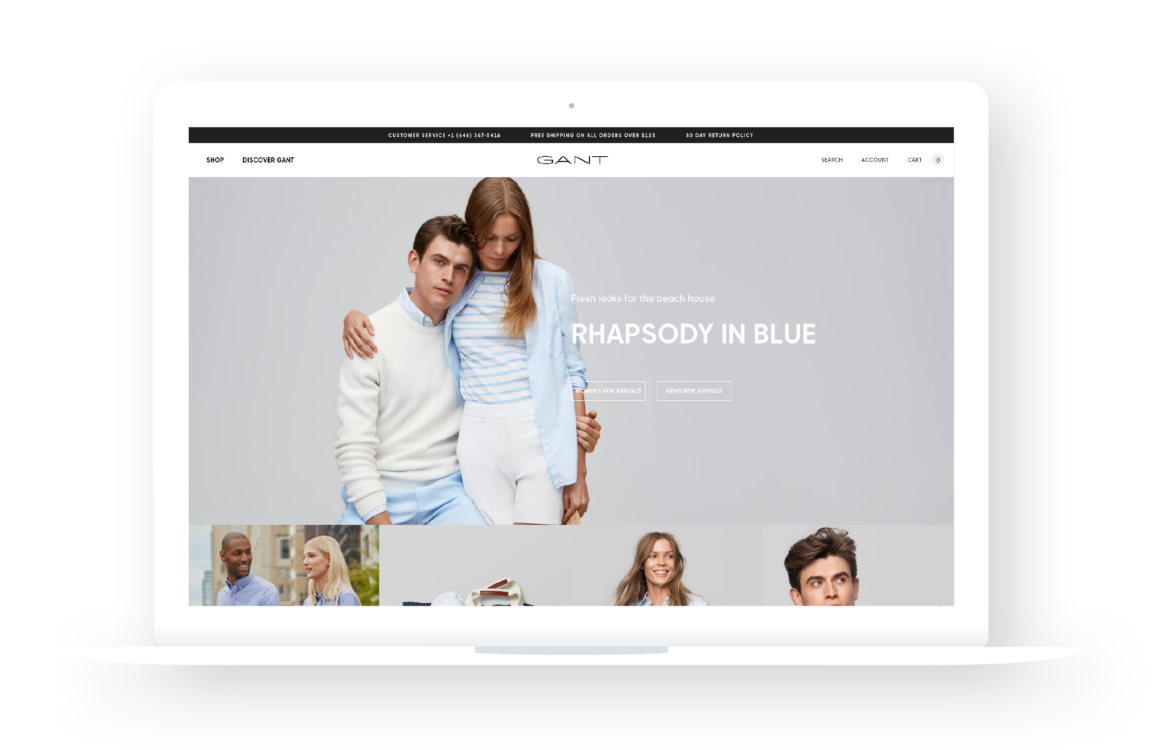 Increase the number of product and customer reviews on an item's fit and size, with the option to ask questions and comment on reviews.

GANT achieved a 5% reduction in its return rate thanks to product reviews, in turn significantly increasing its sales.

GANT was able to reduce its return rate by 5% thanks to product reviews.

Thanks to user-generated content, GANT was able to reduce returns and increase revenue.

The e-commerce sector typically has to process costly and time-consuming returns, particularly within the fashion sector. Rather than just ordering one item, customers often order several sizes and colors of the same item. The German market also requires purchases to be offered on account, which entices customers to order multiple items more so than other markets.

The US lifestyle brand GANT wanted to reduce its return rate. Originally based in the classic retail sector, the premium brand has been offering high-quality men’s and women’s fashion in its own online store since 2013. Thanks to strong growth rates of 30–40% per year, the brand was able to achieve double-digit million-dollar sales after just four years.

At the beginning of 2017, the time had come for targeted investment in user-generated content (UGC). “We have found that consumers trust the opinions of other consumers more than advertising claims,” explains Werner Hammer, Head of E-Commerce.

The priorities for the collaboration with Bazaarvoice were clearly defined: The aim was firstly to increase the appeal of the store through more customer reviews, because online shoppers in the fashion sector are influenced by comments and reviews on individual items. Secondly, it was to reduce their return rate.

GANT teamed up with Bazaarvoice to establish a strategic UGC program that encourages GANT’s online customers to leave more feedback. Extra fields such as “Was the fit OK?” specifically prompt customers to provide the relevant content. A question and answer function on product detail pages was also introduced to allow for direct communication, with customers now being able to answer queries from other consumers and comment on reviews.

The results of this speak for themselves: GANT’s return rate was reduced by up to 5% within the first six months of the launch of Bazaarvoice’s solutions. It now has a return rate of 35% — in this industry, anything less than 40% is considered a great success.

This success is particularly remarkable given the context of seasonal collections. Seasonal items are removed from sale after three to four months, along with customer feedback on fit and size, and are therefore removed from the range after a relatively short time. The fact that the return rates were still falling in spite of this further highlights the effectiveness of the UGC program.

What’s more, GANT also had a specific design in mind. “We had to adapt the entire layout to the appearance of our brand, which we were able to pull off seamlessly,” explains Werner Hammer. By reducing the return rate, the investment costs for the tool have already paid for themselves. “We had an added value that could be tangibly measured in terms of money.”

Thanks to the reduction of orders containing multiple of the same items, the brand was able to save €300,000. Sales figures were also improved thanks to increased item availability, as any shirt or sweater that remains online rather than in the mail can potentially generate more revenue.

The GANT team also feels like they were well supported in the technical implementation and strategic consulting stages. Several sessions were held to explain the tools in detail, and regular meetings are held to determine whether the agreed targets have been met. Bazaarvoice gains merit for its constant support, with customers not just receiving a solution, but also ongoing mentoring. This is also true when it comes to strategic objectives — if new challenges arise during the course of the project, new measures are taken accordingly.

Customer reviews provide the level of reliability that GANT needs

The strong increase in customer feedback has also benefited GANT in other ways. As it operates in a high-quality segment with high prices, the average shopping cart value at GANT is significantly higher than that of other online fashion stores. In addition, the target audience of GANT is those aged 40 and over — a group who spends less time online than others. Both of these factors contribute to a higher spending threshold when ordering online, meaning that security and reliability are key. The customer feedback generated by Bazaarvoice helps to ensure that GANT remains trustworthy by providing the honest opinions of other customers.

Increase in the sales of bestsellers — an unexpected, positive side effect

In implementing this solution, GANT was also able to increase sales of its retail bestsellers by 50% thanks to customer reviews. Popular products in the offline sector, such as V-neck sweaters, polo shirts, or Oxford shirts, were much less popular online until the launch of Bazaarvoice’s solutions. “These items are doing really well now,” Werner Hammer is pleased to say, “which is a very positive side effect.”

GANT plans to continue to expand its collaboration with Bazaarvoice going forward, and also hopes to optimize its search engine results: “Anyone who works in e-commerce needs to understand that UGC is the SEO tool of choice,” says Werner Hammer.

GANT was able to reduce its return rate by 5% thanks to product reviews.

Founded in 1949, the American lifestyle brand GANT combines European sophistication with American sportswear, and now has stores in the US, 14 European countries, Japan, China, Israel, and Turkey. Since 2001, the company has also been present in Germany with more than 700 points of sale, 30 stores, and 8 outlets in 27 cities. Its online store was launched in 2013 and has recorded double-digit growth rates every year.

The independent lifestyle brand inspires shoppers and empowers them to envision how products will fit into their lives with shoppable visual and social content from...